Little churches and landscapes in their holy silent, even the warm spa and baths, in their heat and vapor, bear a deep spirituality evoking great mystics who lived or went by this land, around San Quirico, Vignoni and Bagno Vignoni.

Holy art, religious feasts, together with the peaceful place made by sweet hills, attest this mystical spirituality.
S. Francesco married in a mystical wedding Lady Poverty in Val d’Orcia, according to Legenda Aurea by Jacopo from Varagine and the famous painting by Sassetta, preserved in Condè Museum in Chantilly.
Caterina from Siena stayed in Rocca di Tentennano and in Bagno Vignoni, diving in the medieval pool healing water.
The russian director Andrej Tarkovskij, a mystical cinema poet, filmed here touching scenes of his masterpiece Nostalghia, and even the italian director Franco Zeffirelli chose this land as set for Fratello Sole Sorella Luna.

The chapel of Madonna di Vitaleta, one of most famous view in Tuscany, is located on a road between San Quirico and Pienza.
The building is composed by only a room and has a little rose window on the front, above the lintel of the doorway; on sides two pilasters (lesene) are the base for the pediment, in which the tympanum show a blazon.
All fronts are covered with stone and the steeple rises in the back one. Under its vault, the steeple is composed by two contiguous round-arched bells cells.
The chapel is the original place of the statue of Mary by Andrea della Robbia, now kept in the church of S. Francesco and, they say, bought in a shop in Florence in 1553. Named for the first time in 1590 in an act, it has been redesigned out and indoor by architect Giuseppe Partini in 1884, inspired by Renassence models.
You can reach the chapel on foot from San Quirico or Bagno Vignoni. Trails are available on the website: Sentieri della Valdorcia

Collegiata of San Quirico and Giulitta

The church, a wonderful example of Romanesque style, was built since 1080 on ruins of an old baptistery made by travertine, Pieve of San Quirico in Osenna. On the front there are three doorways: the southern one, with a curved entrance (protiro) and man-shaped columns (telamoni), is dated 1288 and attributed to Giovanni Pisano. He was the same architect of the ancient vault steeple, substituted with the actual one at the end of XVIII century. A rose window decorate the front with figures of animals and plants. The plan has a latin cross scheme in a unique nave. In 1936 the cealing was restored, bringing to light again the polychrome trusses, characterized by wooden tiles in “ornato senese”. Two elements deserve a special mention: the wooden inlaid choir in a Renassence style, originally made for the Siena cathedral and then bought by marquis Chigi for the Collegiata, and a triptych by Sano di Pietro, painted in XV century for this church.

The church of Santa Maria Assunta

Usually called “Sante Marie” or “Santa Maria ad hortos”, because of it was surrounded by gardens which will become Horti Leonini, the church was located on the Francigena way, near to the Porta Ferrea.

The construction is dated back to the second half of XI century. The simple and suggestive building made by squared travertine stones has only a nave with a little apse at the end, crowned by arches and brackets with animals’ heads pattern.

It’s oriented to north-west where a little doorway open. Most significant is the doorway on the Francigena, revealing similarities with the Sant’Antimo one.

The church, usually called “della Madonna”, was built on ruins of the San Francesco convent; the new sanctuary rose between 1867 and 1870. the travertine front shows an eye above the doorway. Indoor an unique nave has four lateral altars. On the major altar we can find the statue “La Madonna annunciata” by Andrea della Robbia (XIV century), moved here from the chapel of Vitaleta in 1870. Significant works are l’“Angelo annunciante” and “Vergine annunciata”, polychrome wooden statues by Francesco di Valdambrino (XV century), “La Visitazione” by Ventura Salimbeni (XVII century), a crucifix by the Siennese school (XV century), l’”Immacolata Concezione” e la “Predica di San Giovanni Battista” (1597) by the Empoli. 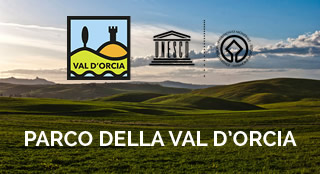 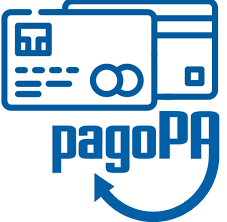